Ai Ping, the deputy head of the International Department of the Communist Party of China (CPC) Central Committee, is arriving Nepal for a three day trip June 29, 2012.

Unsubstantiated reports have it that the team will leave for New Delhi upon completion of its Nepal trip.
This trip then assumes significance in its own manner. 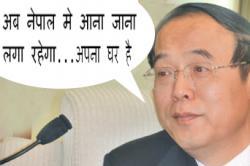 However, official sources in Beijing claim that the team will leave for Iran from Nepal.

He is meeting all the Kam Chalau men apparently rejected by the majority of the population.

Nepal’s foreign ministry sources however, claim that the Chinese Embassy in Kathmandu has not formally communicated regarding the visit of the delegation.

May have told to some ‘confidante’ as in the past when Wen Jiabao was to land in Nepal?

This is for the first time a high ranking communist party leader is visiting Nepal without formal invitation.

Why not the Chinese? When the Norwegians can. For the Indians, Nepal is home away from home.

Notably, the visit is taking place at a time when rumors have it that while in Brazil, Nepal’s Prime Minister Baburam was denied a meeting with Chinese Premier Wen Jiabao.

That was summary insult of Nepal PM.

Baburam’s excessive India leaning and undiplomatic behavior exhibited by the prime minister during a five hour stopover of Premier Wen in Nepal could have irritated Bejing, critics opine.

Reports quote informed sources as claiming that deeply worried by Nepal’s fluid political situation following dissolution of constituent assembly and lately with the increase in activities of western powers that have made Nepal a play ground against China, the high profile delegation might have planned its visit to Nepal.

The fresh visit of a Norwegian Minister and a UK Minister uninvited might have provoked China to send the delegation, also claim sources.

To recall, welcoming an eleven member delegation representing the United Marxist Leninist Party in Beijing, Mr. Ai November 22, 2010, had claimed that any foreign interference in Nepal will not be tolerated by China.

China keeps on airing such statements for reasons unknown.

Chinese leaders have been making similar utterances but sadly with the advent of republican order-which was also supported by the Chinese regime, activities against China have increased exponentially. Indian Foreign Secretary Shyam Saran had seduced the Chinese regime in early 2006.

More problems for China remain in the pipeline.