Grand greet to ex-Nepal King in mid-west, to sense pulse beat of nation 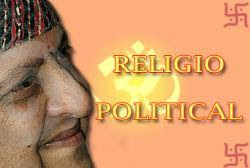 In his so-called religious trip to the region, former King according to sources, will also hold talks with local politicians, it is reported.

Much ahead Gyanendra Shah landed at th airport, supporters of monarchy had converged at the Gautam Buddha Airport in Bhairawaha.

Thousands of supporters from nearby districts of Kapilvastu and Nawalparasi were present at the airport. He stayed at the Airport for about half an hour. Locals derided at the political parties and demanded immediate return of monarchy. Gyanendra only smiled and preferred not to make any comments, reports have it.

They also chanted slogans against federalism.

Later the former king was escorted by hundreds of motorbikes towards Hotel Nirvana.

On the way from Airport to Hotel, general public and supporters of monarchy had thronged to welcome the former Nepali monarch.

From Lumbini Gate to Buddha Chowk, the former King preferred to walk along with his supporters.

The Annapurna post daily quotes a royalist as saying that though the King is on a religious trip, his inner intention is to understand the peoples’ sentiments towards monarchy after the dissolution of the Constituent Assembly.