He also advises that those ‘interests’ should not be taken ‘negatively’. 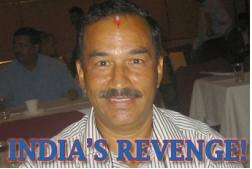 Is Thapa talking this?

“The problem lay with our own leaders because they themselves have become the carrier of India’s interests in Nepal”, claims Thapa.

“In order to materialize our economic interests we need also to establish better and balanced relations with both India and China.”

He did not make it clear as to whether he is talking of having equi-distance or equi-proximity with our immediate neighbours?

“India needs to understand that putting in place a puppet government in Nepal will not work for India either. Our leaders have become their puppets. But, there is great distaste amidst general Nepali population towards India which is not good for both the countries”.

“Don’t you think that Nepal’s kings were also puppets of India,” asks Nagarik.

“This is not true. After 2007 B.S., particularly when King Mahendra became the King of Nepal tried to come out of India’s influence, it was since then a faction in the Indian politics became suspicious and considered that Monarchy was the main obstacle. Lately when King Gyanendra took the Magh 19 decision India had perceived that India thought that it would be taken into confidence. That also did not happen. It is in the same room the then Indian Ambassador Shiv Shankar Mukherjee told me that the King had cheated India. He had met the King few days back. The King had indicated nothing to him. Later in the SAARC, the King took the stand in favor of awarding observer status to China, which took India by surprise. It was since then relations between King and India turned bitter.”

“India was all set to take revenge. By then Maoists too had become certain that they cannot win Kathmandu by any means. The Maoists wanted satta at any cost. The Maoists adopted the strategy to create fissure between the King and the political parties. The idea was to cooperate with one to dupe the other. They then asked the King to cooperate. The King had the army behind him. They wanted to side with the King and dump the political parties once and for all. In an encounter with Baburam he has asked me if the King will hand over power to Maoists or not. The King did not heed to their request either. They then sided with the political parties. They then signed the 12 Point Agreement."