Nepal: Who is responsible Your Excellency? 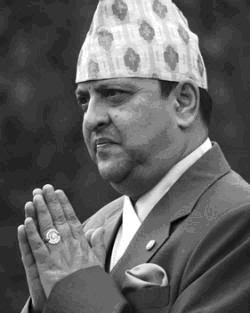 Kathmandu: The politics which began with dirty tricks must end up with chaotic results. A natural phenomenon indeed. Nepal is paying a very heavy price for having beamingly bowed down to the Indian dictates, November 22, 2005, which instead of making a New Nepal- promise, has already disfigured the erstwhile Shangri-La, Nepal, which is what had been in existence since time immemorial.

Neither we have the new Nepal as promised by the subservient Indo-pendent leaders nor are we in the possession of the country that was so near and dear to us all until some years ago, lament analysts.

New Delhi twisted the arms and our leaders pleasingly allowed the former British colony to do what she can in order to tear apart the entire country to which we have it now with us.

A broken and torn apart Nepal is what we have in our ownership. If India is around, smaller countries need no enemy from abroad; it has rightly been said by some who have studied India from close quarters.

A completely devastated and chaotic Nepal with anger and hatred for our own brethren is all what we own now. One Nepali national has become the enemy of the other set of the son(s) of the same soil. Heart rendering situation that it is.

Foreign interference, read primarily that of the Indian Union, has attained a new height to the extent that the India groomed and elevated Nepal Prime Minister Babu Ram Bhattarai too have had to admit that he had to bear with the Indian pressure while selecting Nepal Government’s Chief Secretary.

This does mean that Bhattarai for the first time felt the Indian heat after the NOIDA/JNU scorching but learning temperature. This is just the beginning of the beginning. More remain in the pipeline. Yet after ruining Nepal into several pieces, Indian Ambassador claims that Nepal is the elder sister of India-the younger sister. Height of hypocrisy.

In all, Nepal has become like radar less ship which may or may not approach the safe bank. Looking at the present day politics as it stands as of today, analysts have least hope that this set of repulsive leaders will bring the country back to the original track from where it got derailed through the kind courtesy of Shyam Saran, S. D. Muni and Brajesh Mishra including the then Indian Prime Minister Atal Behari Bajpayee. That was a collective campaign. Later Dr. Man Mohan Singh joined the same crusade. This has become now an “open secret”.

Analysts wish to recall as to how and when the Maoists then residing in New Delhi may have been approaching the Indian Prime Minister’s office for substantial support in order to shake the Nepali foundations. As far as analysts could take note of the Nepali politics, after the Maoists formally declared their dramatic People’s War, the latter may have (presumably) first approached the then Indian Ambassador to Nepal K. V. Rajan but unfortunately since his Kathmandu tenure was about to come to an end, he thus may have briefed his successor Shyam Saran to take up the Nepal Maoists issue positively. This much could be well authenticated if one were to believe what Bharat Dahal, a former Maoists leader who later quit the party for good, has written on Maoists-India linkages in Dristi Weekly, August 7, 2012.

Dahal claims that the Maoists were in contact with the Indian establishment right after the declaration of the people’s war in 1996. Mind it that it was this time when the Indian envoy in Kathmandu was Sri Krishna Venkatesh Rajan.

But Dahal has not mentioned about Ambassador Rajan for some mysterious reasons. Yet Rajan was a modest man and a true Indian national. Needless to say, Rajan’s successor Shyam Saran got the point handed over to him and began supporting the Nepal Maoists then residing in Lucknow, Siliguri, Faridabad and Bhatinda and finally he made hilarious effort in allowing the Maoists to settle in NOIDA as Indian government guest.

Saran must be a kind soul, analysts believe. Rumours then in Kathmandu even revealed that the 40 points demands raised by the Maoists were drafted by the Indians themselves. Height of dangerous diplomacy. The reason could have been simply to irritate the Nepali population against India which would provide the Indian establishment to damage Nepal from all possible sectors under the same ruse.

Yet the problem cropped up in the mean time on how to bring the Maoists excessively closer to the Indian regime for her own advantage? Fortunately, S. D. Muni, a close friend of Ambassador Saran and equally close to Bhattarai, the present day Nepal PM unfortunately, came to the rescue of Maoists.

A Gorkhali young man pounced upon his own land of birth. Thy fate mother Nepal! Bhattarai had, to recall, developed intimate relations with this Muni while being at the JNU Campus-the seat of learning which tentatively produces Nepal haters.

Sometime later, it was this JNU Professor, the one who hates each and every Nepali save a few those who have graduated from JNU, who managed a short meeting of Nepal’s distinguished and illustrious nationals Bhattarai and Dahal with then India’s security advisor, Brajesh Mishra-a cunning Indian national that he was taken even by the Indian politicians.

Mishra pushed this matter to his Prime Minister Atal Bihari Bajpayee and convinced the latter that he will make both Dahal and Bhattarai to swing the Indian way and preferences.

Thus it was this grand design of security advisor Brajesh Mishra that the Maoists duo promised that they will never go against the Indian genuine security interests and that whatever they will do only be to damage Nepal specially the harm will be done to shake then ruling Nepal monarch. Mishra and Muni must have jumped. The job was done.

It is even talked in high placed Kathmandu political circuit that both Dahal and Bhattarai signed the draft that was prepared by Mishra himself. All that our nationals did was to sign the deal at the Indian PMO, June 2002, which assumed the force of a Treaty. This perhaps still remains kicking and alive.

One interesting event by then had taken place.

Girija Prasad Koirala, the then Nepal PM was on an official trip to New Delhi wherein he is supposed to have complained his Indian counterpart as to why Bajpayee’s administration had been reluctant in nabbing the India declared “terrorists” residing in Delhi?

Look what the Indian PM said to Koirala.

“Is it that? Oh! Those Maoists are loitering in Delhi. I had no knowledge in this regard”.

This speaks of Bajpayee’s inner intent because by that time the Mishra sponsored Dahal-Bhattarai treaty had already been signed. Atal jee is taken as a modest Indian but he should take care of his own country’s interests first even if that demands damaging Nepal.

Fatherly figure Atal did his best for his country. No qualms. Upon Koirala’s return to Kathmandu, to recall, he is on record to have said that “India was supporting the Nepal Maoists”. It was for the first time that the NC party in its entire history went and spoke against India.

This does mean that Koirala until then had not come closer to the Maoists.

He indeed came closer to the Maoists when he was denied an audience with the King even after sending thirteen petitions in series to the Royal palace. An infuriated Koirala, sometime later, upon winding up his trip to Beijing as Nepali Congress Party Head instead of landing in Kathmandu preferred to make a whirl wind trip to New Delhi (he diverted his flight from Hong Kong) which gave him an opportunity to meet with ferocious Prachanda and Bhattarai who had already by then become the Indian guest of honour. Krishna Sitaula, Shekhar Koirala, Chakra Bastola (not sure) and Muni perhaps managed this meet in NOIDA suburbs. It was this first meet which took a formal shape and became an effective tool to swoop King Gyanendra.

By time, Indian regime had a new Prime Minister, Dr. Man Mohan Singh who got pretty annoyed by King Gyanendra’s speech made in Dhaka at the SAARC Summit wherein the latter visibly took a firm stand that China must be brought into the SAARC mechanism with an Observer status. (Chinese Ambassador Yang Houlan has been named China’s Ambassador to SAARC. He has already presented his letter of credentials at the SAARC Secretariat. China has observer status).

This infuriated Dr. Man Mohan Singh to the extent that upon meeting King Gyanendra he even posed a direct uncomfortable question to the King. (Leaked by some media men who were in Dhaka and were the preferred ones of King Gyanendra).

Look what he said to the King and how the King responded.

“Your Majesty! Why are you excessively inclined towards China?”

The King said, (sic) “Who is responsible for this Your Excellency? You have pushed me to the wall”?

Analysing both the question and the answer, what comes to the fore is that India was not happy with King Gyanendra for his tilt towards China and the explanations he made. By the same token, King Gyanendra held responsible the Indian regime for his compelling reasons to lean towards China.

A pretty annoyed Dr. Man Mohan Singh then used the June 2002 treaty “tool” and summoned all the Nepali leaders to come to Delhi and forced them all to sign the most humiliating 12 point agreement (almost a Treaty) which eventually did away with the Nepali monarchy. Rest of the events that followed, our august readers understand it better.

King Gyanendra paid the price for his excessive China favour and now the entire nation is paying for all that had happened during those conspiratorial years. China too obviously is paying. But appears active in repairing the damage already caused.

Things began with Mishra ended up with Saran’s cunning manipulations. That’s all for this week.