Nepal will surely take its usual course but with a big bang: Thapa 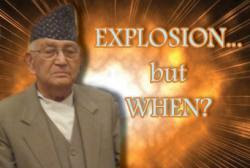 Whereas UML leader Madhav Nepal claims that Unified Maoists Chairman Pushpa Kamal’s public assertion that his party will continue to remain in power for 25 years and takes it as a ploy to impose a dictatorial rule, Surya Bahadur Thapa-a more maturated politician opines that in saying so Pushpa Kamal has exhibited his political immaturity.

Matured leaders that Thapa is talk of maturity.

“To claim that present government will continue for 25 years is his immaturity (Ketauli Buddhi).” ( Childish utterances).

“I do not want to make more comments on such an immature (abodh balak ko jasto) remark.”

When asked by lone veteran journalist Rishi Dhamala what he has to say on PM Bhattarai’s fresh remarks that Nepal’s Key lay outside the country replied Thapa, “I can clearly see that the key is right here in the country. If he thinks that it is outside the county why not he brings the key back home.”

Double speak but in the process he is defending his old alien friends. Shrewd Thapa.

“For how long will the country continue to remain in a status-quo,” asked Thapa and claimed, “The day country decides to take on to the natural course there will be a big explosion.”

Is he talking of end of Nepal?

“No matter for how long we block the course of a river. The day comes when the river decides itself which course to take but that happens with a big explosion,” he claimed and added, “Nepali politics will also take its own natural course.”