A worrisome tussle is underway over the South China Sea. China is preparing to auction off two sections that are widely recognized to fall within Vietnam’s exclusive economic zone, 200 nautical miles offshore, even after Hanoi turned the exploration rights over to India. The discord between China and India is not limited to maritime border and exploration rights, argues Harsh V. Pant of King’s College, but reflects “strategic rivalry between two rising powers in the Asian landscape.” China is boxing India into a corner, Pant claims, forcing it to defend freedom of navigation, international law, relationships with other East Asian states and its own credibility as a rising power. China’s aggressive moves, reaching far into the Indian Ocean while claiming sovereignty for the South China Sea, could be at odds with its own long-term interests, spreading uncertainty and mistrust among neighbors. It could only cement its reputation as a regional bully and rally other states, reinforcing desire for a trouble-free South China Sea. – YaleGlobal 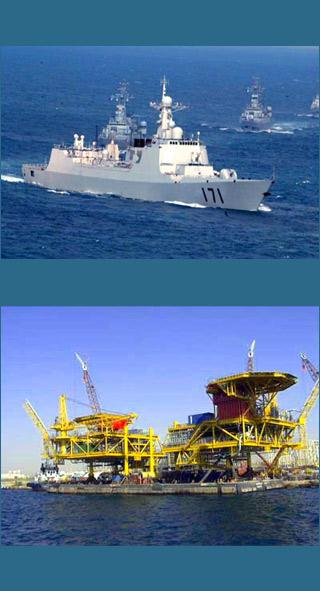 LONDON: While the world focuses on the rising tension between China and the Philippines in the South China Sea, Beijing and Delhi are also engaged in a quiet struggle in the contested waters. By putting up for international bidding the same oil block that India had obtained from Vietnam for exploration, China has thrown down a gauntlet. By deciding to stay put in the assigned block, India  has indicated it’s ready to take up the Chinese challenge. At stake is Chinese opposition to India’s claim to be a regional power.

The conflict between India and China over the South China Sea has been building for more than a year. India signed an agreement with Vietnam in October 2011 to expand and promote oil exploration in South China Sea and has now reconfirmed its decision to carry on despite the Chinese challenge to the legality of Indian presence.

By accepting the Vietnamese invitation to explore oil and gas in Blocks 127 and 128, India’s state-owned oil company ONGC Videsh Ltd, or OVL, not only expressed New Delhi’s desire to deepen its friendship with Vietnam, but ignore China’s warning to stay away. After asking countries “outside the region” to stay away from the South China Sea, China issued a demarche to India in November 2011, underlining that Beijing’s permission should be sought for exploration in Blocks 127 and 128 and, without it, OVL’s activities would be considered illegal. Vietnam, meanwhile had underlined the 1982 UN Convention on the Law of the Sea to claim its sovereign rights over the two blocks being explored. India decided to go by the Vietnam’s claims and ignore China’s objections.

India’s moves unsettled China, which views India’s growing engagement in East Asia with suspicion. India’s decision to explore hydrocarbons with Vietnam followed a July 2011 incident during which an unidentified Chinese warship demanded that a INS Airavat, an amphibious assault vessel, identify itself and explain its presence in the South China Sea after leaving Vietnamese waters. Completing a scheduled port call in Vietnam, the Indian warship was in international waters.

After an initial show of defiance, India showed second thoughts. In May, India’s junior oil minister R.P.N. Singh told the Parliament that OVL had decided to return Block 128 to Vietnam as exploration there wasn’t commercially viable. Hanoi publicly suggested that New Delhi’s decision was a response to pressure from China. In July 2012, after Vietnam gave OVL more incentives in terms of a longer period to prove commercial viability, India decided to continue the joint exploration. Vietnam decided to extend the OVL contract for hydrocarbon exploration in block 128, reiterating that it valued India’s presence in the South China Sea for regional strategic balance.

In June 2012, state-owned China National Offshore Oil Company, or CNOOC, opened nine blocks for exploration in waters also claimed by Vietnam. Oil block 128, which Vietnam argues is inside its 200-nautical mile Exclusive Economic Zone granted under the UN Law of the Sea, is part of the nine blocks offered for global bidding by CNOOC.

By putting up for global bidding a Vietnamese petroleum block under exploration by an Indian oil company, China has forced India into a corner. That India would not be cowed by Chinese maneuvers came during the July ASEAN Regional Forum in Phnom Penh. There, India made a strong case for supporting not only freedom of navigation but also access to resources in accordance with principles of international law. New Delhi, which so often likes to sit on margins and avoid taking sides, must assume it can no longer afford the luxury of inaction if it wants to preserve credibility as a significant actor in both East Asia and Southeast Asia.

Like other major powers, India is concerned about China’s challenge to the free access to the waters of the South China Sea. The South China Sea passage is too vital for trade and international security to be controlled by a single country.

In a bold display of power and with the help of its friend Cambodia, China prevented ASEAN from even issuing a joint statement for the first time in the organization’s 45-year history. China succeeded in playing divide-and-rule politics, thereby ensuring that the dispute remains a bilateral matter between Beijing and individual rival claimants.

When China suggests that it would like to extend its territorial waters – which usually extend 12 nautical miles from shore – to include the entire exclusive economic zone, extending 200 nautical miles, it is challenging the fundamental principle of free navigation. All maritime powers, including India, have a national interest in freedom of navigation, open access to Asia’s maritime commons and respect for international law in the South China Sea. China has collided with Japan, South Korea, Vietnam and Philippines in recent months over issues related to the exploitation of East China Sea and South China Sea for mineral resources and oil.

India’s interest in access to Vietnam’s energy resources puts it in direct conflict with China’s claims over the territory. In an ultimate analysis, this issue is not merely about commerce and energy. It is about strategic rivalry between two rising powers in the Asian landscape. If China can expand its presence in the Indian Ocean region, as New Delhi anticipates, India can also do the same in South China Sea waters. As China’s power grows, it will test India’s resolve for maintaining a substantive presence in the South China Sea.

India has so far been a passive observer amidst growing maritime tensions and territorial claims in the region. But now after expanding its footprints in the South China Sea, New Delhi must come to terms with China’s regional prowess. The challenge for New Delhi is to match strategic ambition realistically with appropriate resources and capabilities.